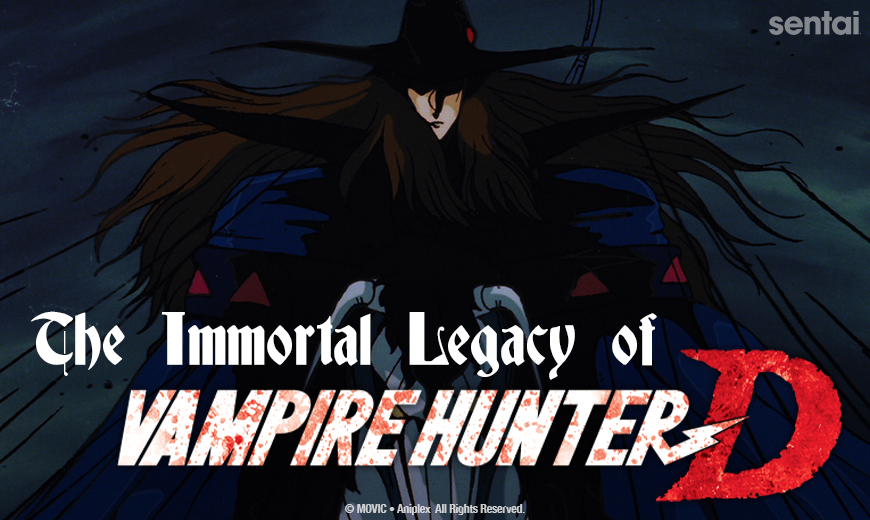 Here at Sentai, we love to sink our teeth into vampire anime — so it’s a good thing we’re rereleasing one of the most bloody amazing vampire anime movies of all time this month! The first Vampire Hunter D movie is, without a doubt, a must-see film for any anime or vampire enthusiast, and we’re incredibly excited to share it with you in all its gruesome glory.

To celebrate the upcoming release of Vampire Hunter D, SteelBook Edition, we’re looking back at what makes this one-of-a-kind film so… enduring. Influential. Immortal, you might say. Because Vampire Hunter D isn’t any old vampire flick, and once it gets its teeth into you, you won’t dare look away.

The Worldbuilding of Hideyuki Kikuchi 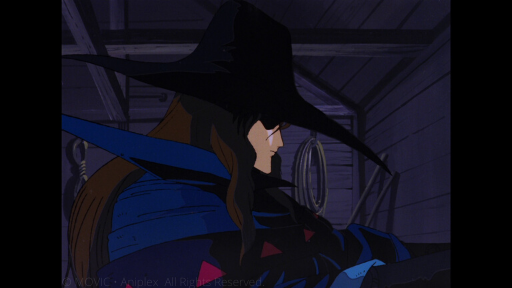 The first Vampire Hunter D movie came out in 1985 in Japan and became one of the first anime releases in the United States during the early 90s. As such, it served as many westerners’ first exposure to anime as a genre. Based on a long-running series of novels by famed Japanese horror author Hideyuki Kikuchi, Vampire Hunter D draws on a lengthy list of influences and traditions to craft a fully realized world you can really sink your teeth into (pun intended).

Set in a post-nuclear wasteland in 12,090 A.D., the world of Vampire Hunter D operates under an almost feudalistic system ruled by creatures that go bump in the night. Vampires (or “Nobles”) rule over humans using both their supernatural abilities and mastery of futuristic technology. Humans live in fear of their supernatural enemies, but they’re slowly taking back the planet thanks to roaming mercenaries-for-hire who specialize in hunting supernatural entities.

Eagle-eyed viewers will spot quite a few of the influences that shaped Vampire Hunter D throughout the movie. From Lovecraftian horror to European folklore to science fiction, the world of Vampire Hunter D offers something for everyone and creates a truly unique landscape for viewers to explore. And with dozens of novels to draw material from, it’s no wonder Vampire Hunter D feels truly alive and fleshed out. Whether you’ve consumed other parts of the Vampire Hunter D universe or whether this is your first exposure to Hideyuki Kikuchi’s work, this captivatingly gruesome hellscape is sure to fascinate.

The Captivating Characters of the First Vampire Hunter D Movie 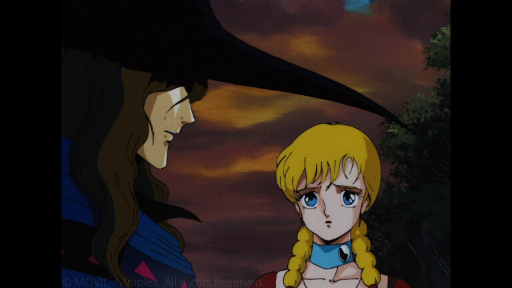 Vampire Hunter D doesn’t just boast intriguing worldbuilding. The film and associated universe populates its world with unique and memorable characters that linger in the viewer’s minds long after the final credits roll.

Chief among these characters is the eponymous D, a vampire hunter with a shadowy past. He’s immediately intriguing thanks to his unflappable demeanor and unforgettable appearance, but it’s his lineage that really makes him stand out. D is a dhampir, a daywalker of Balkan folklore — basically a half vampire. His genetics make him the ideal vampire hunter, but while his goals and motivations are mysterious indeed, it’s clear from his vampire-slaying skills that he’s been in the supernatural assassin game for a long time.

Another character of note is… well, let’s just say he’s D’s right-hand man. Or left-hand man, to be more precise. Embedded in D’s left hand lives a symbiote, or a parasite with a mind of its own who occasionally cracks wise while D remains stony-faced and stoic. (Remind you of anyone you know?) But Left Hand isn’t just along for the ride. He can consume enormous amounts of matter and send it to another dimension, and when the going gets really tough, Left Hand can actually bring D back from a near-death state. Talk about having a handy friend, right?

Rest assured that there are even more characters waiting for their moment in the spotlight in the first Vampire Hunter D movie, but we’ll leave discovering them to you. ;) 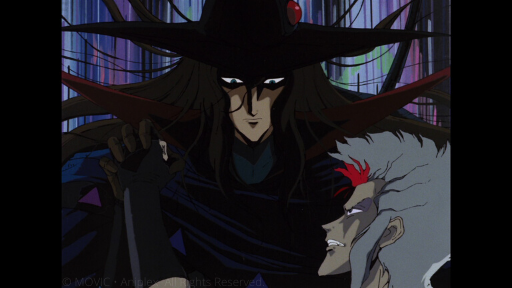 We can’t talk about Vampire Hunter D without mentioning its sheer aesthetic appeal! The 1985 movie has those classic retro graphics we all know and love, and they hold up as beautifully as an immortal vampire even 35 years after the film’s initial release. They’ve been remastered in high definition, too, so you’ll get to enjoy the aesthetics of Vampire Hunter D in all their glory.

And what a glorious sight they are! The movie’s ethereal visuals and saturated colors are a treat for the eye, but we’re even more intrigued by the blend of styles used to articulate the universe depicted in the film itself. Vampire Hunter D combines a gothic sensibility with science fiction and a big helping of wild west tropes and images — not to mention vampires — resulting in a unique mix of styles all its own.

Wildly atmospheric and completely arresting, these are some top-grade vampire aesthetics you just can’t miss. And let’s not forget the new SteelBook packaging, which totally complements the artistic experience of Vampire Hunter D.

Take a Bite out of the First Vampire Hunter D Movie Today!

With meticulous worldbuilding courtesy of Hideyuki Kikuchi, intriguing characters and enthralling aesthetics, it’s no wonder that the first Vampire Hunter D movie is as beloved today as when it was first released. Be sure to snag your copy of the Vampire Hunter D SteelBook while they last, and enjoy this grandfather of all vampire animes!

Love Vampire Hunter D as much as we do? Want to know what our next SteelBook release will be? Let us know by tagging @SentaiFilmworks on social, and don’t forget to sign up for our newsletter!